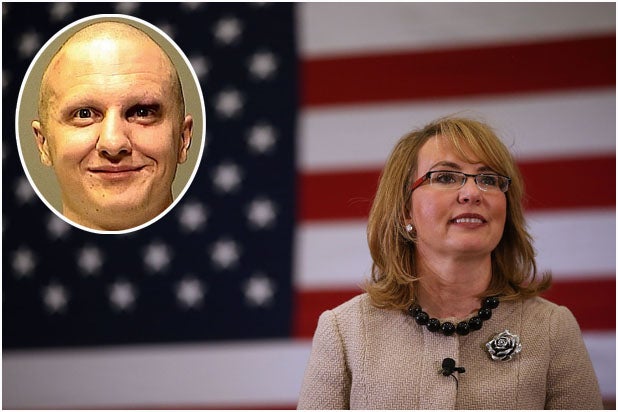 Jared Loughner files rambling lawsuit alleging he is innocent of a 2011 shooting spree that killed six people and wounded 13, including Giffords

Five years after he went on a shooting spree that killed six people and wounded 13 others, Jared Loughner has filed a federal lawsuit against one of his victims, former U.S. Rep. Gabrielle Giffords.

In his rambling two-page complaint filed at the U.S. District Court in Phoenix, the convicted mass killer seeks $25 million from Giffords, whom he shot in the head on Jan. 11, 2011, outside a Safeway grocery store in Casas Adobes, Arizona.

Loughner, now 27, claims he was “framed” and was “handpicked illegally to be a sleeper assassin.” He says that “the govt. put a chip in my head to control my mind,” according to the Arizona Republic.

While awaiting trial, Loughner was diagnosed as schizophrenic, causing his case to be delayed until medical treatment rendered him competent. He eventually pleaded guilty to avoid a potential death sentence and, in November 2012, was sentenced to life plus 140 years in federal prison.

“My incarceration is illegal. I am actually innocent. I was Framed. I am a victim of project mk-ultra the govt. put a chip in my head to control my mind,” the former Pima Community College student wrote in the filing.

“Gabby Giffords never got shot, it was all an act, Giffords watches Ronald Reagan movies and pretened (sic) she was hit,” he continued.

The mass killer went on to refer to “the Illuminati,” which he claims Giffords is a member of, and says he is being subjected to “microwave testing” and waterboarding “on defendant’s direct orders,” and references the recent mass shooting in San Bernardino, California.

Along with the rest of his grievances, Loughner complains that his prison food contains “no peppers, steaks, fruit juices,” and that he cannot get C-SPAN on TV.

Giffords, co-founder of the national gun-control organization, Americans for Responsible Solutions, was initially placed in a medically-induced coma and underwent cranioplasty surgery the following May to replace part of her skull that had been removed.

She was finally released from hospital that June, and continued speech, music, physical and occupational therapy from home.