December 2013 while I was in court for trial I was being attacked all day.It was strange when the judge said to take a break everyone left the court room and went straight to the bathroom I mean everyone.There was a line all the way down the hallway,ladies and men.The only thing they could hit was my head,they did not attack my body with pain but they sure attacked my eyes and ear’s and my head was so foggy and I could not concentrate at all.So I believe everyone in the court room was being hit with Microwaves because the microwaves did effect everyone Kidneys. I have never seen so many people using the bathroom at one time in my life and I had been in the court room a lot just watching trials before my court date. I was defending myself that day and was sitting in front roll right behind the DA table. The Judge made eye contact with me for ten to fifteen seconds at one time while I was sitting there in the court room and he to had a blank stare without a blink. They were at least fifty people in the court room that day, so if everyone there was to be scanned at that time I believe they would have emitted radiation using frequency scanner. When being attacked with microwaves the body electric goes up .When being hit with these different frequency’s it does effects the kidneys. You can always tell when people are being hit in this manner by just looking into there eyes and they lose all concentration. The RFID chips is old technology but many people still have these, most people that they chipped all they do is torcher them for long and then make them run back to the hospital and they would take them out with out their knowledge of ever being chipped or they just murder you and take them out after your death without your knowledge. The Judge look and stared at me as if he thought I was causing the mind control. Everyone to be tried in court when they stood up one by one the Judge told them the max sentence that they were facing in jail. Some was facing sixty days some ninety days and some one hundred and twenty days and when I stood up the Judge said three years and I have no priors at all. My experience in the court room people do not have to have Implants to be mind controlled by Microwaves. If you have implants you will know that you have them if you have not been over medicated like I was for fourteen years. I had to sleep in a recliner chair for almost a decade because of back pain, come to find out this was because of implants attached to my spine. Thanks And God Bless!

Kris it was great talking to you on the phone and i would love to talk to you again,you are the only one in a while that i have spoken with.I have being going through a very difficult time right now.All my protection has been sabotoged even my alternitive medicine.I had four bottles of EDTA and was puting twenty drops in distill water and holding in my mouth for thirty minutes,i have been doing this for several months now.Last night when i did this a cut open up in my upper gum in my mouth and the pain shot straight to my brain.This EDTA Chelation Formula is to try to open my arteries up in my legs.Both legs from the waist down is covered with rash coming out of my body to the point where i can't walk good.I am up to four onces a day of silver ions now,it takes four hours twice a day to do all my thearapy.I am battling disease,implants,radiation and sabotoge.My head is so NUM i can't funtion well or spell or see well.I can't stay on computor very long.I will call you later if i get to feeling a little better. Take care my friend and GOD BLESS..

HOUSE TO BUILD FOR FREQUENCY RESISTANCE OPTIMIZED!!...OR AN UNDERGROUD/WATER HOUSE, TOO!

SEE THIS VIDEO AND WEB SITE, I SUGGEST TO SAVE IT!!

.....Use, see and save this, she is saving my life, even though they are "spraying" us daily!!

Thanks for calling just now, Richard, let me know how it goes with my advise and Dr. Hildy's info. above, I recommend her phone consult and the Oil of Oregano and Oil of Olive Leaf!!  Leave me your phone if you want and I'll check on you next week end after trying these things...good luck...the red sores will be gone..remember the Lavender Epson Salt and Borax to soak in the bath tub!!

Richard, send me your direct email to my direct email...I was going to send this directly to you instead of post here.  Here is a Frequency Resistor...now we just need to make it "human size"...as this one is to stop low and other abnormal frequency from knocking out our computers!!!!

From Wikipedia, the free encyclopedia
Jump to: navigation, search
For other uses, see Bead (disambiguation).

A ferrite bead at the end of a USBcable 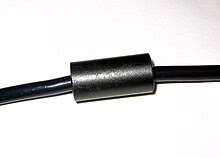 A ferrite bead with its plastic shell removed

Comment by TI in Florida on April 2, 2014 at 4:03am
Hi Richard, for the rashes, one doctor diagnosed mine as fungal, and he told me to use regular over the counter creams like Clotrimazole cream or even athletes foot cream. They seem to work. I don't know if the rashes are caused by extra ingredients in the water supply, or does the equipment being used on us create fungal rashes? I put a water filter on my shower head, and I only drink bottled water, and it seems to clear up many problems. Good luck.

As for mind control in court ,i forgot after getting out of jail my Van was parked in the court house parking.They attacked my van also that day when i court around 6:30 pm my wife dropped me off at the court house to get my van,my Van would skip and jump real bad until i drove a few miles.They do this a lot at my home also attack my Van,i have had my van check by experts.I have to keep resetting the COMPUTER SYSTEM.these tactics cost me a lot of money before i caught on to how they can attack a AUTO.  THANKS AND GOD BLESS !

nicolerenee901 commented on Xuthal's blog post Silicea Alternative
"Hello. I wanted to know where or from who did you hear of this remedy"
9 hours ago

EVERYTHING THROUGH OUT THE WORLD WOULD BE THE PROPERTY OF THE STATE WHICH IS ALSO KNOWN AS THE CROWN CORPORATION. THEY ARE PLANNING TO MAKE US PENNYLESS SLAVES BUT MOST ARE UNDER MIND CONTROL PROGRAMMING TO THE POINT OF APATHY.Viruses are not contageous. The so-called covid-19 vaccine is a slow acting poison. Those who have received it will die within years. Many who believe that they have received the so called covid-19 vaccine have not actually received it because many nurses who are in full…See More
14 hours ago
1 Comment 0 Likes