These technologies are not 100% associated with mind reading, mind control abuses and tortures.

Ultrasonic imaging is the second most often used imaging modality in medicine, as well as in military

is a technology for transmitting information spread over a large bandwidth (>500 MHz) that should, in theory and under the right circumstances, be able to share spectrum with other users. Regulatory settings of Federal Communications Commission (FCC) in United States are intended to provide an efficient use of scarce radio bandwidth while enabling both high data rate "personal area network" (PAN) wireless connectivity and longer-range, low data rate applications as well as radar and imaging systems.

l  Near-infrared (wavelengths of 700 nm to 1400 nm): Produced by objects that are glowing hot (light bulbs, the sun, fires). Most "night vision" cameras use this because the sensors are cheap (just stick a visible-light-blocking filter over a digital camera sensor) and because you can illuminate an area with IR-emitting LE Ds without anyone noticing. Most greyscale night images are using this part of the infrared spectrum. Glass is quite transparent to this, as are many lightweight fabrics (most notably, those used in swimsuits). Metal reflects it, and most opaque objects block it. If you assume it behaves like visible light, you usually won't be wrong.

l  Mid-infrared (wavelengths of 1400 nm to 8000 nm): Produced by objects that aren't quite glowing hot (jet engines and the like). Used mostly by heat-seeking missiles.

l  Long-wave or thermal infrared (8000 nm to 15,000 nm): Produced by objects that are at "reasonable" temperatures. This is the band that is used by heat-detecting cameras. These cameras are quite expensive, and need to be cooled down below the temperature of the environment (otherwise, they'd see themselves rather than the world around them). Most solid objects will block or smear the IR from objects behind them, while adding their own heat to the mix.

l  Far infrared (15,000 nm to 1,000,000 nm): Produced by cold objects (think "liquid nitrogen" cold) and by specialized scientific equipment. Not much practical use.

Terahertz radiation (T-rays) sit uncomfortably on the border between infrared and microwaves. They're hard to produce and hard to detect, but most non-conductive objects (walls, clothing, etc) are transparent to them while most conductive objects (metal, the water in your body) reflect them. They're mostly a scientific curiosity right now already being used for airport security in a number of countries, and known as "nude scanners".

LEXID Sees Through Walls To Next Apartment

The handheld LEXID 'Lobster Eye' X-ray Inspection Device allows the user to see through walls to hidden spaces beyond. The device is particularly well-suited to finding and examining the secret compartments and passages in your castle or other dwelling place. 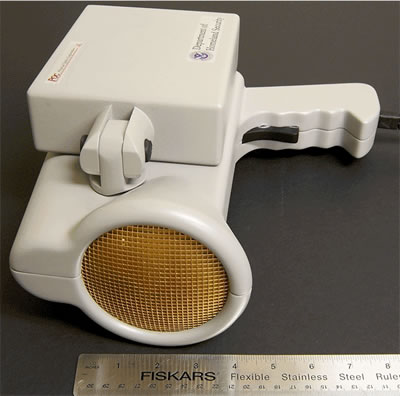 The LEXID device acquires and focuses backscattering photons from hidden objects that are irradiated by the beam coming from the device (a low power x-ray generator). The x-ray optic focusing enhances image resolution without using higher power x-rays (always a plus for people on the other side of the wall!). 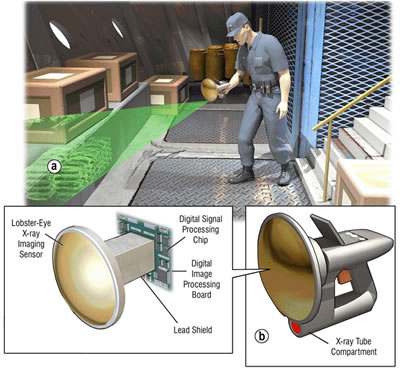 Boffins are really getting out the options for looking through walls; see LifeReader Senses The Enemy Through Walls and DARPA Radar Scope Can Sense Thru Walls for details on other options.

I use some other sf devices as predecessors in the other stories; here's an amusing reference from a 1936 John W. Campbell story:

"They had the tube then. They called it the PTW tube - Probability Time Wave. They'd been trying to make a television set that would see through walls..."
(Read more)

This passage just goes to show that even seventy years ago, people were thinking about a device just like this one. Gordon Giles used a similar idea in his 1937 story Diamond Planetoid to see which planetoids where worth mining; take a look at the X-beam projector.

Dr. David A. Morehouse formed Remote Viewing Technologies in 1997, a company originally designed to train police officers in the art and science of Remote Viewing.
In early 1998, Dr. Morehouse began training civilians in the exact military protocols and standards to which he was trained in the Remote Viewing unit, circa 1987 to 1990. To date, well over 15,000 students have been trained in the United States, Europe and other far-reaching parts of the globe.

Dr. Morehouse’s Remote Viewing students find their way to him from a range of diverse backgrounds. He lectures and educates across the spectrum of human interests. His students include (but are not limited to) medical doctors, researchers in science, medicine and technology, engineers, homemakers, physicists, students, artists, and alternative practitioners.

His teachings and writings have been especially appreciated in Europe where his reputation and his evolving humanistic philosophies have earned him countless accolades in the European Press where he is routinely described as “one of Europe’s leading new metaphysicians.”

As a former US Military Major & CIA Remote Viewer “or psychic spy”, David Morehouse brings forth an incredible tale of an amazing journey and profound message of peace for the future of our world.
David Morehouse, in his book Psychic Warrior, describes his experiences as a psychic spy and counter espionage officer.
TheGatewayExperience.com

Cinside’s hand held radar device enhances personal safety for security forces and police swat teams by detecting human beings through the walls before entering the room or building. An easy to use device with an affordable price will make the personal radar an indispensable safety device for security forces all over the world.

Permalink Reply by Soleilmavis on January 10, 2011 at 9:04am
http://www.guardian.co.uk/uk/2002/oct/13/humanrights.mobilephones
How mobile phones let spies see our every move
http://www.telegraph.co.uk/technology/news/6254646/Wi-Fi-signals-used-to-see-through-walls.html
Scientists at the University of Utah in the United States have found a way to harness Wi-Fi signals to 'see' through solid walls

Radar Can See Through Walls
This devices uses microwaves.

Camero Tech Ltd., an Israeli company, markets a product that allows war fighters to envision the positions of people and objects located behind solid walls. The company’s Xaver 800 product is touted as a portable ISR
platform.

The product uses micro-power pulse radar technology to penetrate walls and has a range of 20 meters. “That means that even with a stand-off of 10 meters, you can still get a picture of what is 10 meters behind the wall,” said Josh Levontin, the company’s director of business development.

The cameras are able to transmit over a variety of networks, such as Wi-Fi and cellular networks.

The future of surveillance includes cloud technology, according to Buse. “It allows a user to plug into the Internet, log into an account, and have stream of surveillance that is not cost prohibitive,” he said.

The output of the sensors can be accessed wirelessly so that users can view the imagery on smartphones.

The CIA wants to spy on you through your TV: Agency director says it will 'transform' surveillance

When people download a film from Netflix to a flatscreen, or turn on web radio, they could be alerting unwanted watchers to exactly what they are doing and where they are.

Spies will no longer have to plant bugs in your home - the rise of 'connected' gadgets controlled by apps will mean that people 'bug' their own homes, says CIA director David Petraeus.

The CIA claims it will be able to 'read' these devices via the internet - and perhaps even via radio waves from outside the home. A Sony internet TV: The rise of 'connected' devices in the home offers spies a window into people's lives - CIA director David Petraeus says the technologies will 'transform' surveillance General David Petraeus, former head of the allied forces in Afghanistan, is sworn in as the next director of the Central Intelligence Agency on September 6, 2011 in the White House

Everything from remote controls to clock radios can now be controlled via apps - and chip company ARM recently unveiled low-powered, cheaper chips which will be used in everything from fridges and ovens to doorbells.

The resultant chorus of 'connected' gadgets will be able to be read like a book - and even remote-controlled, according to CIA CIA Director David Petraeus, according to a recent report by Wired's 'Danger Room' blog.

Petraeus says that web-connected gadgets will 'transform' the art of spying - allowing spies to monitor people automatically without planting bugs, breaking and entering or even donning a tuxedo to infiltrate a dinner party.

'Transformational’ is an overused word, but I do believe it properly applies to these technologies,' said Petraeus.

'Particularly to their effect on clandestine tradecraft. Items of interest will be located, identified, monitored, and remotely controlled through technologies such as radio-frequency identification, sensor networks, tiny embedded servers, and energy harvesters -  all connected to the next-generation internet using abundant, low-cost, and high-power computing.'

Petraeus was speaking to a venture capital firm about new technologies which aim to add processors and web connections to previously  'dumb' home appliances such as fridges, ovens and lighting systems.

This week, one of the world's biggest chip companies, ARM, has unveiled a new processor built to work inside 'connected' white goods.

The ARM chips are smaller, lower-powered and far cheaper than previous processors - and designed to add the internet to almost every kind of electrical appliance.

It's a concept described as the 'internet of things'. The murderous computer Hal in 2001: But it seems that the danger of computers isn't villainous artificial intelligence - but the information they 'leak' about us

Futurists think that one day 'connected' devices will tell the internet where they are and what they are doing at all times - and will be mapped by computers as precisely as Google Maps charts the physical landscape now.

Privacy groups such as the Electronic Frontier Foundation have warned of how information such as geolocation data can be misused - but as more and more devices connect, it's clear that opportunities for surveillance will multiply.

Hi whis on is best for using if on wants too find there perps?..

Arlene Johnson left a comment for targetedindividualsoultrapping
"Hello, In the edition I devoted to the Targeted Individual community, which is my 36th edition, there are 34 true stories for people to read which should prove that there is such a thing as a TI. Before I published that edition, I published a few…"
4 hours ago

ROBERT WILLIAM MATTHEWS left a comment for James mathews
"The best Sci To to exemplify what it is is,  The Invaders, Amazon, there are two box sets. The 1ST two episodes speak volumes.  The flying saucer are just a metaphors for something that you are not supposed to know about.  Who Sci…"
17 hours ago