The European Human Brain Project has built infrastructure which allows researchers from all across Europe to research the brains of their fellow Europeans in real time while those being researched are allowed to go about their everyday lives? I am an unwilling victim of brain and spinal cord research and I have been thus for more than sixteen years. Since early 2003 I have been wirelessly connected from technology inside my brain and body to a network of computers which allows me to be continually monitored and manipulated and communicated with by a team of unknown neuro staff.
Many years ago I became wirelessly linked by a two way stream of energy to the computer network of these unknown neuro scientists. At the beginning, even though the neuro staff could communicate with me on a consistent basis they were unable to manipulate my brain and body to any significant degree. However, now after more than sixteen years of consistent research on both my brain and body as well as my mind patterns they can move my facial and neck muscles against my will. When I move my own facial muscles of my own accord the exact sequence of events that are occurring in my brain and body are tabulated by the neuro staff. The neuro staff then at a later time can repeat the exact sequence of events in order to move said facial muscles against my will whenever they wish. If they continue to work on my brain and body in this manner they will eventually be able to turn me into a biological robot where I would have no free will whatsoever to the extent that they could eventually remote control me like a robot. Further to this, by using a similar method these unknown neuro staff can now make what are commonly known as technologically induced vocalizations occur, which means they can now induce me to say words and whole sentences which do not originate in my own brain. I have no way of stopping them from inducing me to vocalize words and sentences at inopportune moments which do not originate in my brain. Many other unwilling victims of brain and body research are reporting the exact same experiences as these. For further information please read my website which I alone own and control and which is called www.targetedindividualsireland.net. My name is Gretta Fahey. I live at Newbrook, Claremorris, County Mayo, Republic of Ireland.

I am non-consensually  wirelessly linked from implants in my brain and body to a computer network by a two way link.  This two way link allows the computer and neuro operatives to speak to me against my will and without my permission.   I am being forced to listen to them throughout each day as I go about my everyday life.   I hear their voices coming from inside my head due implantation with a neuro communication device.   I have heard that a neuro communication device known as a brain radio exists and is being used against some targeted individuals.   However, I don't know what type of chip I have been implanted with.    I keep a daily blog of  where I write what these unknown neuro operatives say to me on an ongoing basis.  Here are some of what the neuro operatives have said in the past twenty four hours,  all of which I have heard coming from inside my head.

"No one was expecting this level of extreme interference in this woman's life."     This was followed by   "If you quote my name I will be endangered."    (I did not know the name of the speaker.)

"If I had my way I would fuckin shoot her."

"There is a secondary system in place that has done something extremely evil to the woman, Gretta Fahey.  Her whole face is under our control."

"The program softened her cough for her a bit I suppose."

"You are doing your own loading and unloading.  This is not allowed.  We require a trained expert to carry out all processes which have been deemed to be a danger to human health and safety."   (I was using a wheel barrow at the time I heard this verbiage coming from inside my head.)

" We are now aware that the Irish secret police know what has been happening to you over sixteen years and they have done nothing to alleviate your suffering through fear of their lives and that of their families.   Leo Varadkar knows nothing of this."

"Putting a stop to this woman's harassment is not achievable.  She is locked into the system as tightly as anyone could be locked in. "

"We have developed a way of stopping the majority of human beings of thinking for themselves and of manipulating them to only think in prescribed ways."

"Pull out all the stops.   I need to qualify this woman Gretta Fahey as being insane."

"We wont block the letter.  We will suitably delay it.   (This was in response to the fact that I posted a letter to friend  by ordinary mail, informing her that I have been non-consensually  inplanted and I am wirelessly linked to a computer network from the   implant. )

"We can and we are monitoring the inner dialogue of Irish senior politicians."

Read more…
Hello Friends,
www.invisiblestalker.com
I am writing to see if your organization, website will list my book on your publications section.
I am computer scientist / psychologist turned author since my targeting became too great to work in technical positions I once held. My new book INVISIBLE STALKER is written to appeal to both targeted individuals and non targeted alike. The advantage of this books is that it allows for targeted individuals to read another's extreme story and it has references and best practices for survival.
The real advantage of this book is that it is being sold as science fiction and conspiracy.  This will appeal more to the non-targeted causal readers who are interested in conspiracy theory science fiction stories. Once the book has you hooked on the narrative (especially the eBook) the supporting links to YouTube exposing the technology as real will have the causal non-targeted reader question if this is real thereby raising awareness of our circumstance.
My paper back is well written, and has reference words of reader consideration and study.  My eBook is more comprehensive as  actual information that support my narrative. This being said I would like to have my book listed on your site. Please inform me on the best way to do this. You can be forwarded to the Amazon page for the two versions of my book at www.invisiblestalker.com  Once at the site you can preview the eBook and sample the paperback online for free.
Best Regards,
Dave Huber
Arcadia, California USA
626-445-8236
Read more…

CHRIS ZUCKER PRES,FREEDOM FIGHTERS FOR AMERICA INTERVIEWS MICHAEL F. BELL, TARGETED INDIVIDUAL, TURNED AUTHOR. HIS BOOK: "THE INVISIBLE CRIME", DESCRIBES HIS TRUE STORY AS A TARGET,AND VICTIM OF ILLEGAL HUMAN EXPERIMENTATION. MR BELL TELLS HIS STORY AND PRODUCES HIS MEDICAL EVIDENCE. A BOOK FOR EVERY ONE TO READ. LEARN THE TRUTH, AND PASS IT ON!!!!

HERE IS THE INTERVIEW: 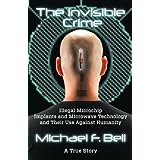 The Invisible Crime: Illegal Microchip Implants and Microwave Technology and Their Use Against Humanity by Michael F. Bell (Jun 21, 2012)

Read more…
science technology engineering influenced by a jinn
technology developed by man ... For the jinn or he would influence, and the report of the jinn ... Because he does good and evil.
for help read the manzil

Genie (Arabic: جني jinnī, or djinni) is a supernatural creature in Pre-islamic and Islamic mythology which (according to both mythology) occupies aparallel world to that of mankind, and together with humans and angels makes up the three sentient creations of Allah. According to the Qur’ān, there are two creations that have free will: humans and jinn. Religious sources don't mention much about them; however, the Qur’an mentions that jinn are made of smokeless flame, and their form being just similar to humans, which also can be good or evil.[1]

The jinn are mentioned frequently in the Qur’an, and there is a surah entitled Sūrat al-Jinn in the Quran. It is a frequent misconception that Islam says that Iblīs was a jinn; however, like Christian tradition, Islam also suggests that Iblīs was an angel that rebelled against God's orders.[2] After the rebellion, he was granted a respite to lead humans astray until the Day of Judgment. However, Iblis has no power to mislead true believers in Allah. Some Islamic scholars have ruled that it is apostasy to disbelieve in one of Allah's creations. Some research by the American Jewish Committee has shown that the belief in jinn has fallen compared to the belief in angels in other Abrahamic traditions.

for help read the manzil

Manzil (Arabic: منزل‎, plural منازل manāzil) is the word for one of seven parts of roughly equal length into which the Qur'an is divided for the purpose of reciting the entire text in one week.

It follows this pattern:

A second meaning is a set of verses from different parts of the Qur'an which help in curing or preventing Sihr(evil magic). The collection of these verses is available in booklet form from various publishers.